Forum rules
This General Forum is for general discussions from daily chitchat to more serious discussions among Somalinet Forums members. Please do not use it as your Personal Message center (PM). If you want to contact a particular person or a group of people, please use the PM feature. If you want to contact the moderators, pls PM them. If you insist leaving a public message for the mods or other members, it will be deleted.
Locked
5 posts • Page 1 of 1
OUR SPONSOR: LOGIN TO HIDE 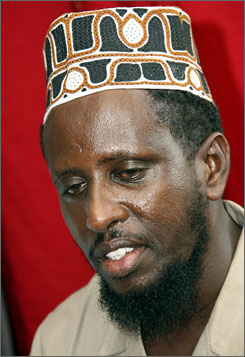 
Sheikh Sharif's delegation includes senior representatives from the Alliance for the Re-liberation of Somalia (ARS), an exiled opposition coalition that includes Islamists and ex lawmakers.

The ARS delegation was quickly ushered to Hotel Medina, where they are holding back to-back meetings with ICU officials, traditional elders and community leaders.
Last edited by Somalian_Boqor on Wed Nov 05, 2008 1:53 am, edited 1 time in total.
Top

A delegation from the self-appointed Hawiye Unity and Tradition Council met with Sheikh Sharif and other ARS officials while in Jowhar yesterday.

Mr. Ahmed Dirie, spokesman for the Hawiye Council, told reporters that the traditional elders and the ARS officials discussed key issues including the withdrawal of Ethiopian troops and the dispute among ICU leaders.

The ARS faction led by Sheikh Sharif inked a peace pact with the Somali government last month that provides a timetable for Ethiopian army withdrawal and the implementation of a ceasefire agreement.

According to Mr. Dirie, the Hawiye Council has also spoken with the Eritrea-based ARS faction and al Shabaab insurgents about the prospects of peace and the withdrawal of Ethiopian forces.
Top

The spokesman for a group of Islamic clerics who said they are mediating among ICU leaders told the media Tuesday that their efforts are "going well."

Sheikh Nur Barud Gurhan told a telephone press conference that they dispatched delegations to several regions and districts to meet with ICU's local officials, while specifically naming the regions of Galgadud, Hiran and Middle Shabelle.

Sheikh Gurhan distanced the Muslim clerics from accusations by Eritrea-based ICU officials that the group of scholars are biased by saying that their sole intention is to mediate among the ICU factions.

The clerics issued a fatwa recently calling for an all-ICU general conference to be held inside Somalia within a month.

Somalia, a country in the Horn of Africa region, has been mired in conflict since 1991. In mid-2006, the ICU militia took control of Mogadishu and other south-central regions and restored order using Islamic law.

Witnesses said three men armed with rifles killed the victim Monday evening inside a teashop near Hotel Subiye, where Sheikh Sharif and the ARS delegation were staying at since Saturday.

ICU commanders in Jowhar declined to comment on the killing, but Jowhar residents said hundreds of security forces were searching neighborhoods for the escaped killers.
There was no motive given for the killing, which is very uncommon in relatively peaceful Jowhar.

But the shooting death of an ICU officer comes at a time when several Islamist commanders have publicly criticized Sheikh Sharif's peace deal with the Ethiopian-backed Somali interim government.

It was not immediately clear why the ICU-controlled police station was attacked, but informed sources told Garowe Online that clan militiamen were angered when an ICU gunman held on murder charges was "freed illegally."
Top

I say this because I see him as the only person that the whole of Somalia can support and will support if he takes the right path which he has the last few months which is to seek peace at all costs.
Top
Locked
5 posts • Page 1 of 1
OUR SPONSOR: LOGIN TO HIDE

Users browsing this forum: No registered users and 53 guests