blame on google if i left some or added more.
Top

In the top list, I think you forgot Sheikh Mukhtar Mohamed Hussein, (the guy who was president for 5 or so days before Kacaanka) as well as Ali Mahdi Mohamed.

And in the second list, can Mohamed Ali Samatar be considered as a PM or.....? No, he was vice president. I see.

whatever happened to that guy who claimed to be president a few years ago? he had his own cabinet and everything. he would invite himself to meet with some leaders and would have all these photo ops with them. he had his own website and posted all the pictures there and on the top of the site, it says "Somalia's President"

I am trying to remember that guys name 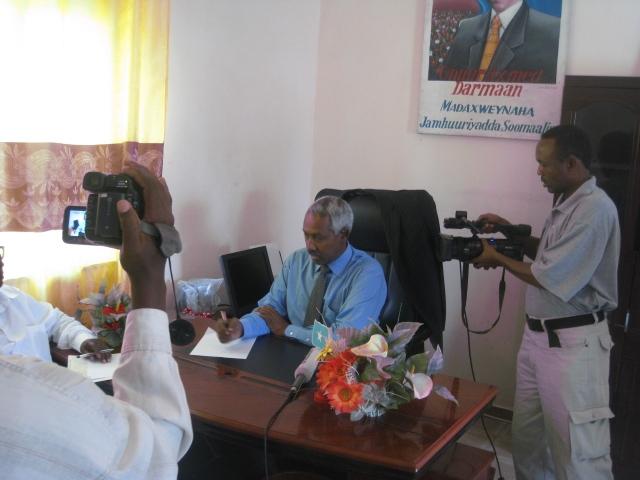 I remember he toured Katrina aftermath in the U.S and took pictures with the victims, they really thought he was the President.

In his website, he hated the TFG and considered them illegal and imposters.

Darman admitted naively that he made an agreement with a German Security firm to provide more than 100 German ex-soldiers (mercenaries). With these German mercenaries, Darman would wish to unleash his clan-militia against Villa Somalia occupiers – i.e. President Sheikh Sharif and his army. And anybody who dares to oppose the UN-plotted Government in Villa Somalia will receive a treatment inevitably meted out by 5,000 strong African Union army (AMISOM) stationed in Mogadishu.

The funny thing is now he stopped being crazy, took down that website and is in Muqdisho declaring himself a candidate for Presidency

I wait to see what he has stored in for us when he loses!
Top

All had authority over SL whilst
Abdiqasim
Abdulahi Yusuf
Sharif Ahmed

I applaud the man though for having balls. So embarrassing.
Top

Don't forget all the guys this who were voted as President of Jubbaland, Lionland, Monkeyland in America, Cananda, and Europe. That is Somali politics for you. Darman just did it before them.
Top

Actually his website is still up. Did a google search after you gave his name


TFG HAS NO MANDATE TO SIGN ANY AGREEMENTS SO PLEASE IF ANY COMPANY OR ANY GOVERNMENT THAT DOES SIGN WITH THEM IT WILL NOT BE ACCEPTED BY ANY ONE . THE SOMALI PEOPLE WILL NOT ACCEPT ANY THING THE TFG SIGN SO WE ARE NOT RESPONSIBLE ANY COMMITMENTS THEY SIGN

But be aware that there is Something Called by the World
Transitional Federal Government which is exile and it is referred to it as he
(TFG). We bring you this news on TFG as it is seen by the world. The TFG has
been Proven by the UN it is Corrupt and unreliable. So who ever Read TFG
news must be careful

We collect here for you to see what the world is saying about Somalia and we
would like to make it clear to our readers not to get confused by the Transitional
Federal Government this is the Exile government that the UN and others created
and now they have found out it is most corrupt thing on the planet they will sell their
body to get one dollar. They also call the Somali people fighting against the
Corrupt inapt exile TFG many names like Jihadest , or islamest or insurgents.

Don't forget all the guys this who were voted as President of Jubbaland, Lionland, Monkeyland in America, Cananda, and Europe. That is Somali politics for you. Darman just did it before them.

There are serious talks about jubbaland, involving IGAD, AU etc. Dont compare it to paper-states.
Top

All had authority over SL whilst
Abdiqasim
Abdulahi Yusuf
Sharif Ahmed