One Day of War

One Day of War 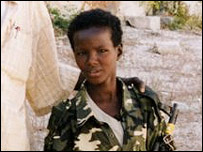 Elizabeth Jones' journey
BBC documentaries May, 2004
The day I arrived in Mogadishu, my fixer began introducing me to boys who lived in the neighbourhood and earned their daily bread by "freelancing" with the militia.

From the moment I met Muktar, I knew he would be the one with whom I would film One Day of War.

He was very small and had an angelic face. He said he was 14, though he could not be sure because his family had been killed in 1994 when his house was shelled.

He remembers the day but does not know how old he was at the time.

A local militia was driving past the smouldering ruins of Muktar's home just after the attack, and rescued him. From that moment on, the militia became the only family Muktar knew.

Muktar had no formal education. When I asked him what sort of things he dreamt about doing with his life, he replied that he was already living his dream.

"I love my country and I am a nationalist," he told me proudly. He did not have a problem with his beloved country being ruled by warlords.

On 22 March, at dawn, I found Muktar sleeping in front of his militia's much treasured "technical" - a jeep with a machine gun mounted on it.


Everyone has a gun and no-one is in control

After waking and cleaning his gun, he set off for the Green Line where he normally sought work.

The Green Line runs through what used to be Mogadishu's commercial district. It is now inhabited by militias and freelance gunmen who make their living through extortion and kidnapping.

Muktar went there as a gun-for-hire to work at one of the militia-run checkpoints.

After filming for five hours at the Green Line, I have to say it was one of the most frightening things I have ever done. Everyone has a gun and no-one is in control.

Muktar was not a bad kid. In fact, under his tough-man exterior he was very sweet and vulnerable.

When I first met him, he had a habit of hugging his AK-47 like other kids might hug a teddy bear.

But then he took to hugging me, touching my arm, putting his hand on mine.

When I left him on the airstrip we were both close to tears.

He told me he wanted to hide in my bag and come with me.

Three days later Muktar was dead. At first I was told it was a gun accident, but then it transpired that he had woken one of his fellow militiamen too early.

Angry, the man grabbed his gun and shot Muktar in the head.

The only comfort I could take was that Muktar was a boy who lived a life he loved, however tragic and empty it might have seemed to me.

The end. Alla ya raxma that was story of young Muktar, member of gowso is ku riix militia.

Sad indeed. Ilaahay haa uu naxaariisto. War traumatizes people in so many ways and life becomes meaningless. I have heard of stories where people were killed for nothing/no reason.
Top