Djibouti's Opposition to partake in polls after 10 years!

Djibouti's Opposition to partake in polls after 10 years! 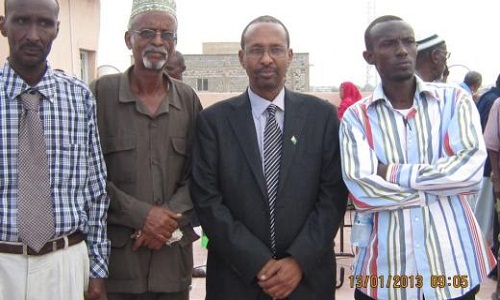 Three main opposition parties in Djibouti -- the Republican Alliance for Development, the Djibouti Party for Development and the National Democratic Party -- are preparing to take part in next month's legislative elections under the banner of a new political bloc known as the Holy Union for Change (USC).

"After intensive discussions, the opposition bloc, which has been joined by movements and independent figures, has formed a coalition to bring a 10-year political boycott to an end," a USC statement said last month.

The ruling coalition, Union for a Presidential Majority (UMP), which has been in power for a decade, included the People's Rally for Progress, the Front for the Restoration of Unity and Democracy, the Union of Reform Partisans and the Social Democratic Party. This year, UMP will also include the Authentic National Democratic Party, which comprises members of the National Democratic Party who split from the opposition, and a few other small parties.

Nonetheless, Abdoulkarim Mahamoud, a founding member of the Djibouti Party for Development, said this year the opposition would be more successful.

"The Djiboutian opposition is more determined than ever to take part in and win the legislative elections on February 22nd," he told Sabahi. "By forming an alliance, the opposition parties have a strong chance of winning these elections."

"To strengthen itself in the short term, the USC plans to expand to absorb all other opposition parties and figures," he said. "When this stage is complete, the coalition will announce its campaign structures, charter and leaders."

As a portent of the opposition's increasing momentum, renowned opposition leader Daher Ahmed Farah returned to Djibouti on January 13th after 10 years in exile in Belgium to join the USC coalition and lend his voice as its spokesman, said Mahamoud.

Before his self-imposed exile, Farah led the now defunct Movement for Democratic Renewal and Development party, which had consistently criticised the Djiboutian government and demanded President Ismail Omar Guelleh step down.

Mahamoud said Farah's arrival would enable the USC to take on the UMP coalition more effectively.

Hassan Abdillahi, a member of the Authentic National Democratic Party, said the UMP is not worried about the Djiboutian opposition.

"The opposition suffers from lack of leadership, this alliance is a façade," he told Sabahi. "Because of a 10-year absence from the political scene, they no longer have legitimacy or political credibility."

"[The UMP] is now stronger than ever," Abdillahi said. "With no credible political manifesto, there is little chance this opposition can beat the UMP."

"There will be joint lists within the USC and all parties will be free to propose candidates," said Abdoulkader Hamadou, a member of the Republican Alliance for Development. "The different opposition parties will then choose from among these candidates those who are best qualified to represent us and give us a presence in the country's 65 electoral districts."

The opposition parties have until January 24th to announce their candidates and until February 14th to finalise their lists to be approved by the government.

"Although we cannot rule out a last-minute manoeuvre by the government, I am confident that the opposition will win," Hamadou told Sabahi.

A number of parties still do not have formal approval to run in the elections, such as the Rally for Action on Democracy and Development (RADD) and the Movement for Development and Liberty (MODEL).

RADD, whose members come from civil society, caused an upset by beating the ruling coalition in municipal elections on February 10th last year. The party is currently led by the mayor of the capital, Abdourahman Mohamed Guelleh.

MODEL is regarded as a moderate Islamist party. Led by Sheikh Guirreh Meidal and with well-known sheikhs such as Abdourahman Bashir among its members, it too has yet to receive formal approval from the Ministry of the Interior.

Here the mercenary businessman turned opposition leader Abdourrahman Borreh urging Djiboutians like me to vote in the upcoming parliamentary vote scheduled at the 22nd of February.

not really as more than 70% of ethnic somalis (majority of djib.) are of the ciise sub clan but its interesting to see if there will be a new split between the maamasan and the fourlabe - both ciise sub sub clans
more info: http://www.somaliawatch.org/archivedec00/001209101.htm
Top
Locked
4 posts • Page 1 of 1
OUR SPONSOR: LOGIN TO HIDE

Users browsing this forum: No registered users and 3 guests