The rights of reer Hiiraan must be respected

The rights of reer Hiiraan must be respected

Although I am not from Hiiraan and I am not from Somalia I think that this region is being mistreated badly by a the weak central government in Mogadishu. Why should Hiiraan have to be foisted with a government of Hiirshabelle state without its involvement, violating the power sharing agreement along the way (this agreement has been witnessed and supported by the international community).

The benefits of independent Somalia (separate from Somaliland) returning to the six regions of the 1960s are clear to see. Hiiraan should be on its own so that it can thrive whilst Mudug should be a single and united region without any so called Green Line dividing Galkayo and Mudug as a whole into two vertically
Top

Under a loose federalism that emulates the UAE political system (albeit a republican and democratic version), Somalia should be divided into the following six federated states:

Thank you my friend

this is the former UN envoy. waa arin ku jirtay heshiiskii IGAD. once we kick out Mooge we gonna fix this.
https://books.google.co.uk/books?id=Uxm ... ia&f=false

Ali Osobles young brother he is a lawyer.

Since the central government in Mogadishu is weak and powerless, reer Hiiraan shouldn't allow such an entity to mistreat them. They shouldn't have any trouble chasing it away.
Top

The basis of this topic is false.

The full story may end up shocking but it deserves to be told in context, not out of it.

Hiiraan is "not" an "original region." 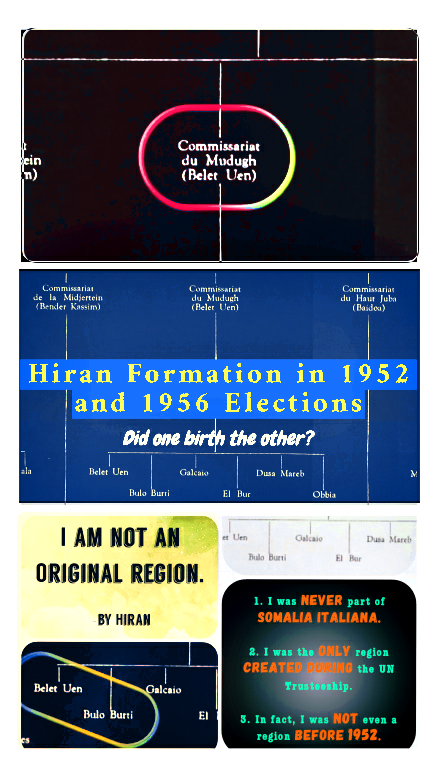 2. It was the only region created AFTER Italian colonialism ended but BEFORE Somalia got independence.

3. And the "only" region "made" during Trusteeship happened to be where---all magically and coincidentally---the Trusteeship leaders would "just" come from; Sh Ali Jimcale, Adan Cadde, Abdullahi Ciise. 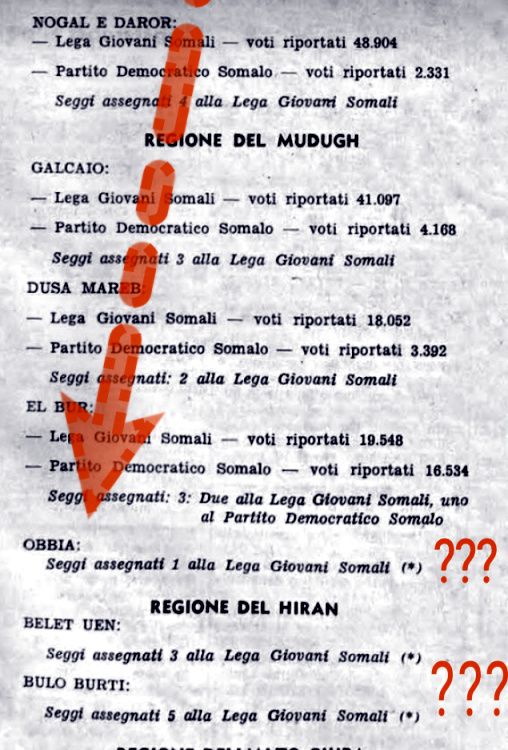 And furthermore, no "voting" ever took place in said region which;

Trust me when I say, everything they say about Gedo region or 18 regions actually happened in Hiiraan. Corruption, nepotism, opportunism, and even A DÍFFERENT SET OF ENGINEERED "ELECTION" SYSTEM WHICH WAS NOT 1 MAN/1 VOTE IS WHY HIIRAAN WAS CREATED AS A REGION.

Hiiraan is at the center of one of the most shocking and damning aspects of Somali history only very few people are aware of even though the basic facts are all all know separately of each other.
Top

I would also like to add that the "oldest" intact administrative region of Somalia is "Jubbaland" and "Gedo" region in particular.

And the official treaty shows Marehan was the only clan in the district except for Gasargude/Gababweyn communities near Luuq---exactly as TODAY! 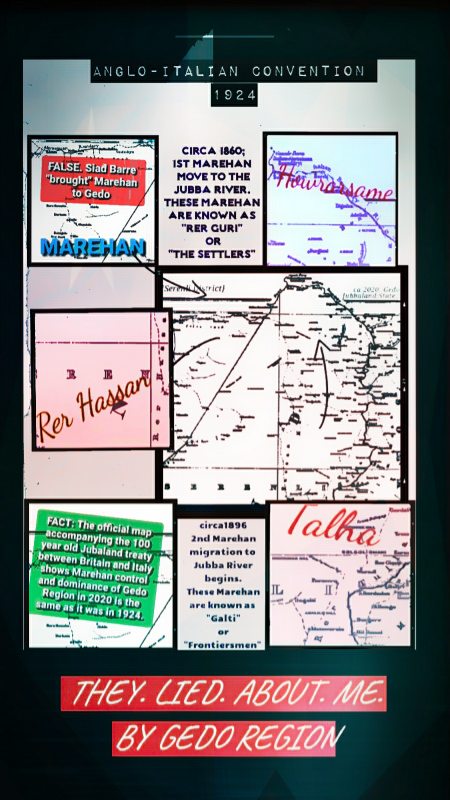 Furthermore, although I will not share it now, but official Italian justification of breaking up Jubbaland once they got it is available DIRECTLY from the records of the Italian colonial admin in Mogadishu.

If Jubbaland was kept together, it would "prevent" cohesion and keep the region separate from other Italian Somaliland due to previous history as British Jubbaland.

So Rome broke it in half and connected them horizontally to contiguous neighbor.

That was the only "political" time Jubbaland regions were formed.

All Somali gov did when IT REVERTED back to original British Jubbaland was reflect the more appropriate administrative organization, i.e. Maxa Tiri speaking Marehan were not reflected in the Italian political decision.

The same Maxa-Tiri speaking Marehan who were the majority of Upper British Jubbaland as the official treaty between Italy and Britain shows! 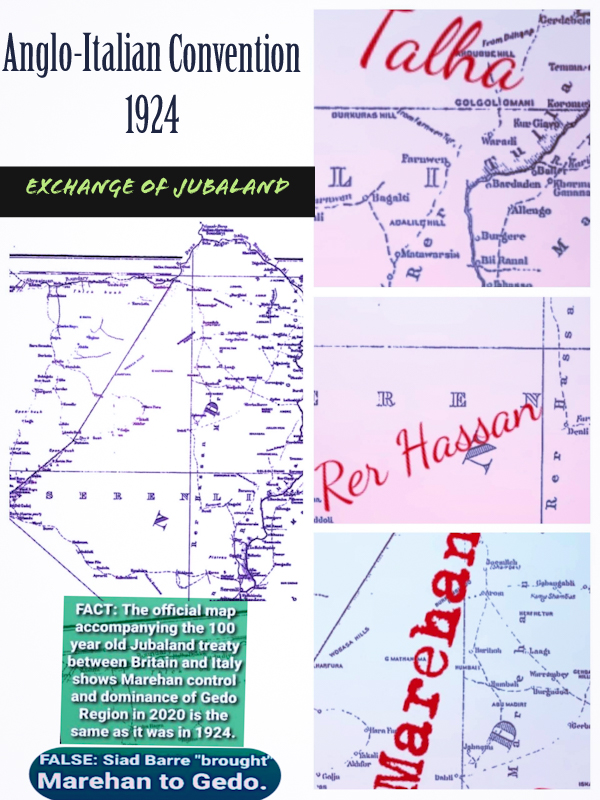 He’s angry as he was food for eelay before Siad Barre. He had to speak Af-Maay before Siad barre saved him 1974 as his capital was baydhabo b

before your mudug map we had Hiiraan/ upper shabelle mp GFOH

1. Everything you brought is irrelevant.


2. The discussion about Hiiraan formation is a Somali national issue.

3. I don't even recognize any attempts to "tribally own" this discussion.

4.As such, if you will respond, respond on the merits not sentimental tribalism.

5. Finally, understand what you want to respond to before responding.

You ask the question why am I bringing this up in a conversation about the "original regions of 1960" when you yourself have brought that Hiiraan was originally part of Mudugh?

If you understood my point, you would not ask that question.

Well what about 5 minutes before when you took that money from the bank?

The question about the formation of Hiiraan in terms of legality and nepotism is widely agreed upon.... So this point about "1960 regions" is entirely illegitimate.

And it is only one of the major problems with the 1960 regions.

It doesn't even reflect the completely contextual move that separated original Jubbaland.

I don't know what you mean about Gedo was controlled by Baidoa, but the administrative mistake the Italians made resulted in ONLY MAREHAN being the clan to win representation under their own name even under colonialism. 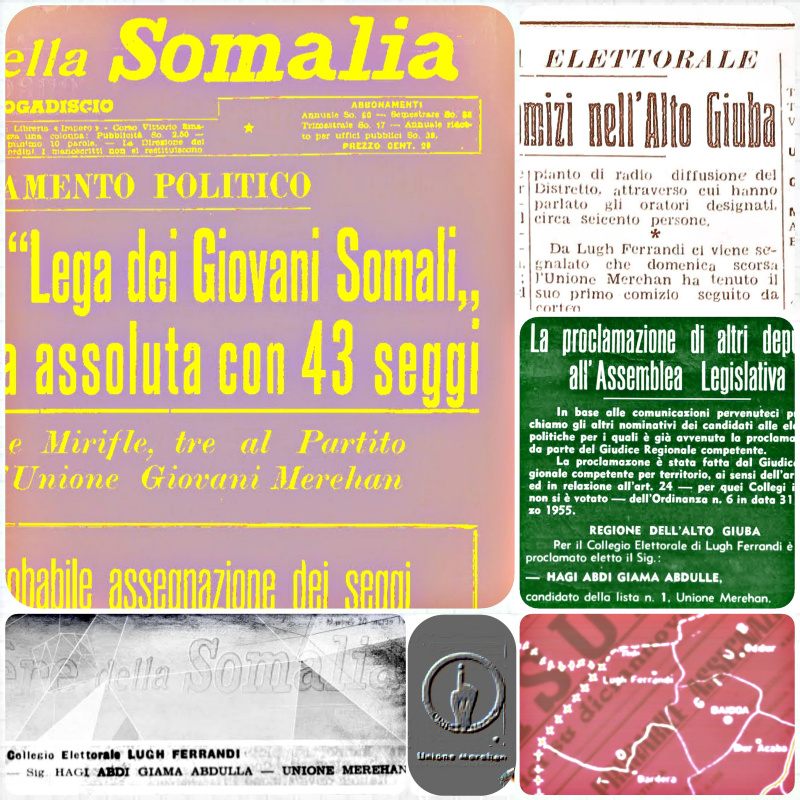 So yes, in "name" Gedo was administratively under Alto Giuba, but Lugh Ferrandi's political outcomes ALWAYS REFLECTED THE MISTAKE ORIGINALLY MADE through its sheer autonomous independence.

It was never controlled structurally, even the Residents named to Lugh Ferrandi were Marehan.

This is another example of how "1960" as the bench mark is akin to historical ignorance/robbery when even in 1956 those regions were actually unreflective of reality.
Top
Post Reply
9 posts • Page 1 of 1
OUR SPONSOR: LOGIN TO HIDE