Lol it’s kind of a Daddy/Orphan syndrome Zidane’s displaying with regard to Ethiopia. DDSI, Liibaan for Sade is house money after Galgaduud, Gedo, Jubooyinka, while Ethiopia is where he identifies proper as his actual country. Case in point this case, who jumps in a thread that had nothing to do with him, and goes back and forth for pages if they believed it wasn’t true or posting a video of barakacyaal claiming they’re Mx when it was never mentioned their clan? Aha because you claimed ‘His country’

This topic has exposed to me just how much ignorance there is surrounding Somali geography.

It is time to update the 100 year old British propaganda maps. 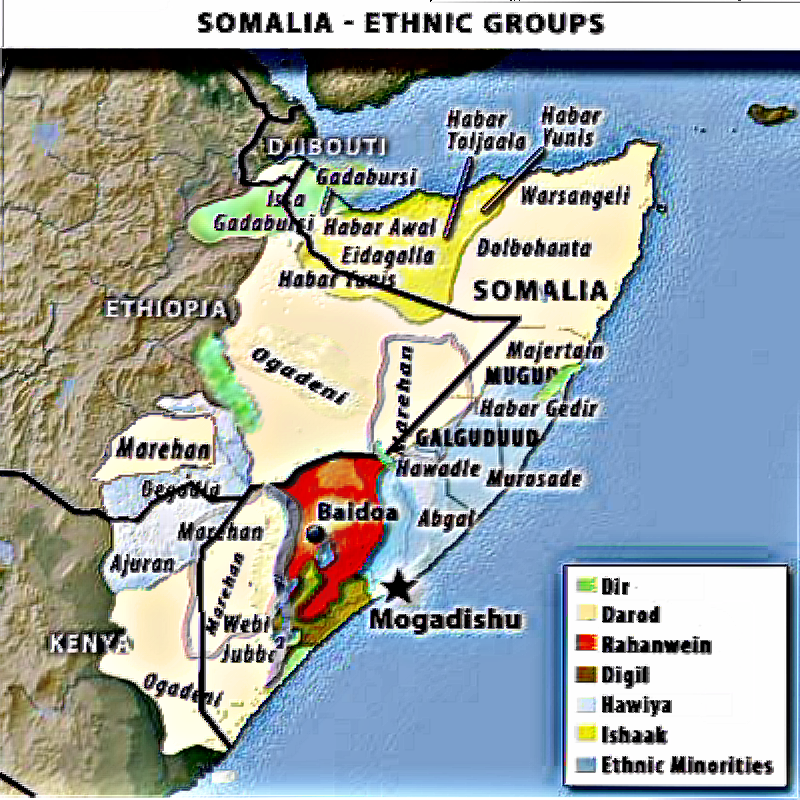 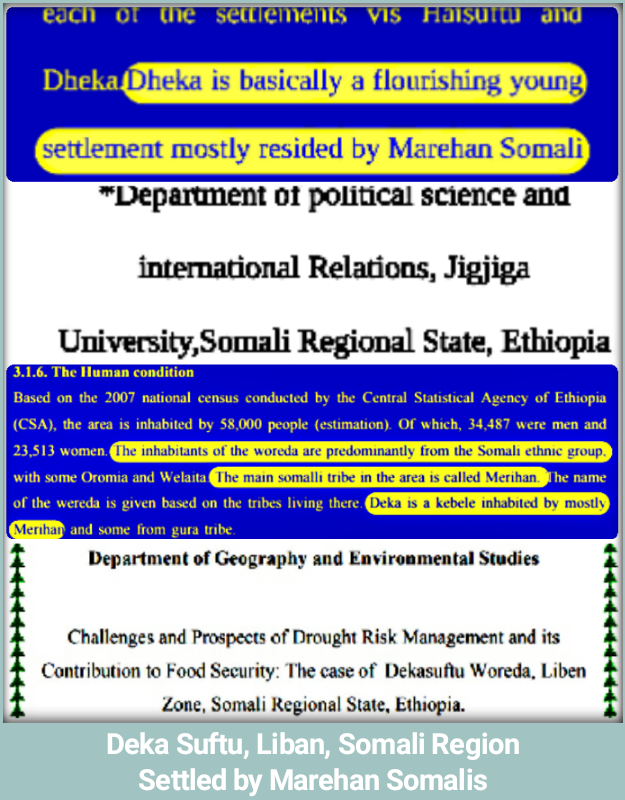 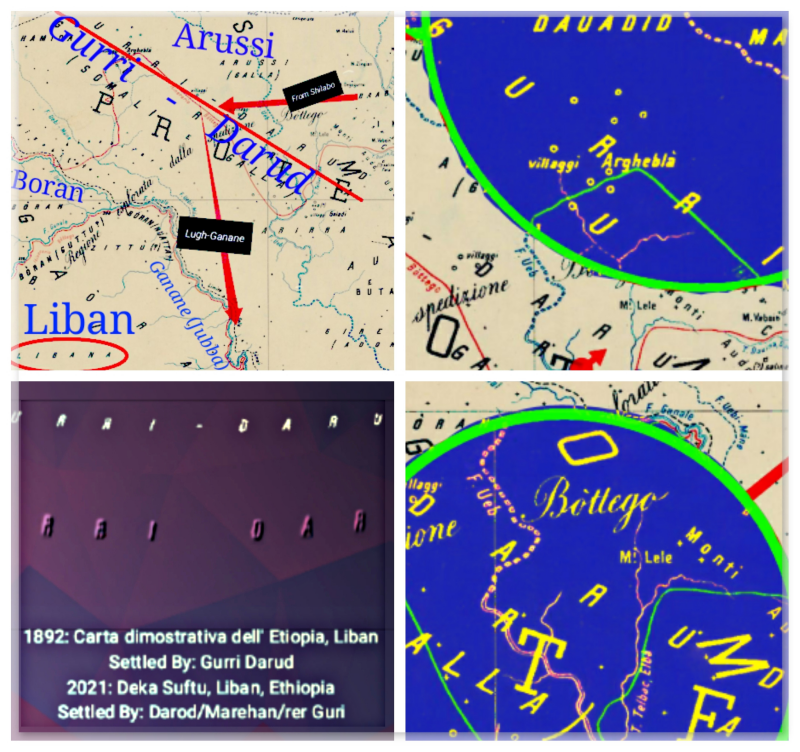 Deka Suftu in the 1940's according to Haile Selassie 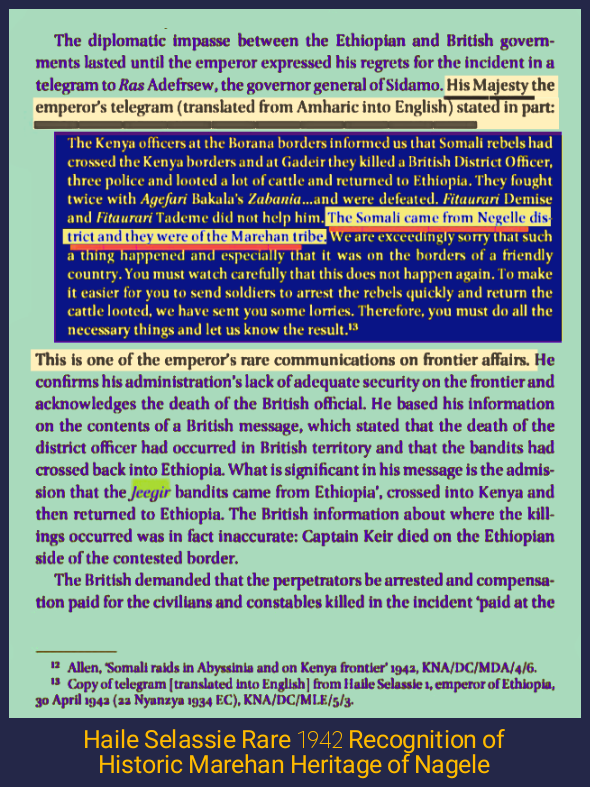 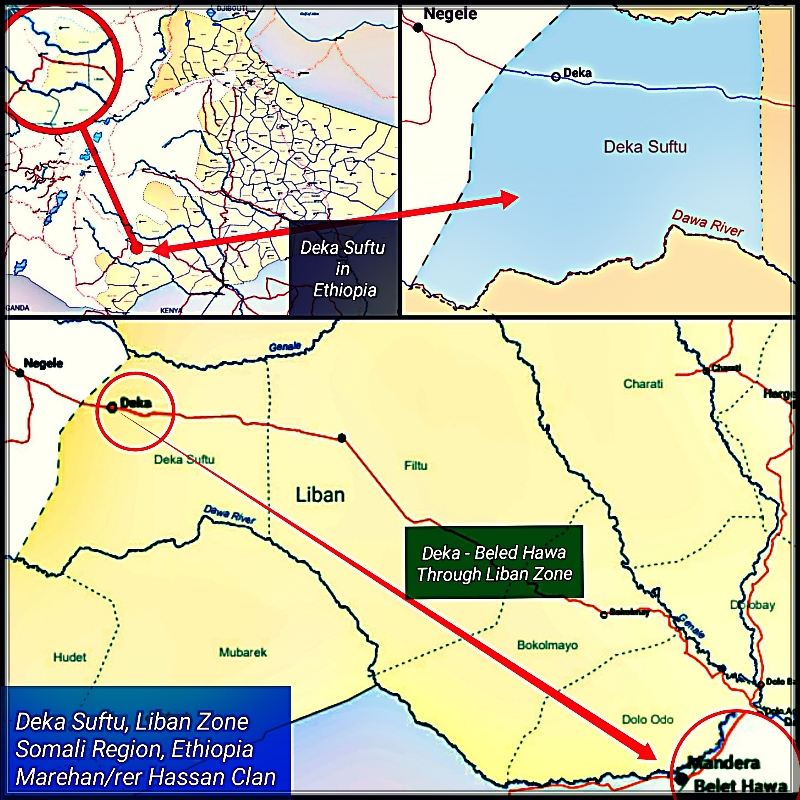 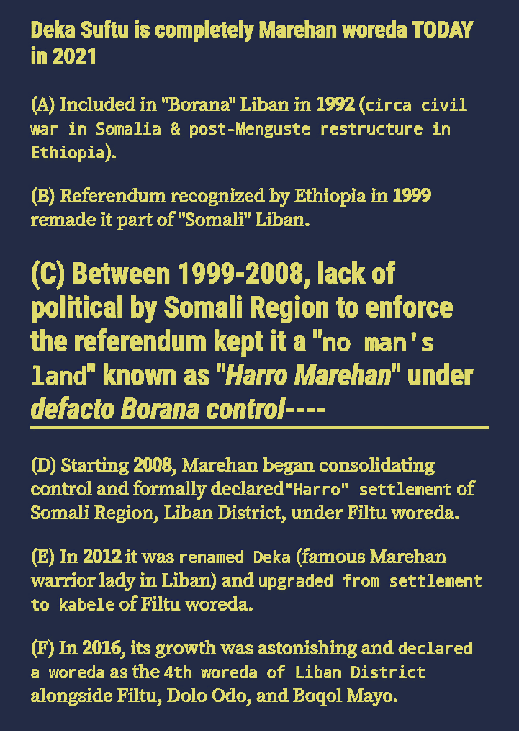 People do not understand the degree to which international border politics between Italy-Ethiopia and Italy-Britain and Ethiopia-Britain concerning Somalis affected Marehan more than any other Somali clan.

It is not Ogaden at all.

It was Marehan that was most affected.

1. The boundary between Kenya and Somalia.

2. The Triangle point that is boundary between Kenya-Somalia-Ethiopia

3. The entire southern boundary between Ethiopia and Somalia.

4. Almost the majority of the northern boundary between Ethiopia and Italian Somaliland north of the Shabelle.

I mean this is how historically illiterate we are as a nation and shoddy our scholarship that people do not understand how much of Somalia's boundary literally reflects Marehan as a microcosm of the larger ethnic land claims.

Marehan is not "AT" the boundaries of Somalia.

The boundaries of what is Somalia today was contested "AT" Marehan.

You think when British banished Marehan from Kenya and said "we made this line because of you, now stay on the other side" that Marehan nomads are going to simply starve and die of thirst on drought years or they will strategize and use tools at their disposal to overcome this imposed nuisance trying to control the movement of their grazing?

I have not met her, but Sadeboi who used to be here has and she is more Tuulo Barwaaqo than he is.


Every Marehan juffo couple families from among them to "embed" in the other side of the border and facilitate easy movement across the artificial border for access during the general migratory movement between Jilaal dryness and Gu rains and especially be safely net when Gu Gu rains fail and drought stalks which was possible every 2 years.

That happened all across the focking border and the embedded know who they are and affirm it and continue being aware of their original "mission."

Even many post-colonial Marehan don't understand or are even aware of it as an actual organized strategy.

One of the funniest things of my participation in this forum concerns the "Dhuusamareeb" issue.

I would argue about it and then I decided let me understand this issue myself and I was going to inform it all.

As soon as I understood it, waan iska aamusay. Shib! To this second, I have not disclosed anything what resulted from my "research."

If the elders let ithe myth permeate for a reason, who am I to disclose it.

The only reason the Reer Yusuf Mayor of Qabri Dahare can even do something like this is a reflection of how much things have cooled between Marehan and Ethiopia and the original hostilities necessitating strategies to continue accessing their grazing land have tremendously declined.

Yahye and Moorif are real and their forms are your forms.

Kenya representation is also important. Sonfure and Uurmidig in wajir especially. The british hate for marehan is still continued by kenya in 2021. Wasn't there an "ogaden" kenyan official who is actually marehan? i can't remember the name right now.
Top

Indudulging details of such nature are by rule never graced with the misfortune of proximity to so many ears with unsparing appetites.
Top

Deka Suftu in the 1940's according to Haile Selassie

Very informative. This is not surprising at all though, MX hate or love it is a lineage a group that will not just get ‘lost in Ethiopia’. Even a civil war where Somalia, Ethiopia will get in flux will not be enough. Another thing that’s interesting is I noticed MX are very good at alliances to reach their goal hence what happened in Deka Suftu even with people that they fought in the past.


Btw I came across this area in Kenya named after MX, are uou familiar with it?

Yup, but I don't think it has been called the Marehan Sandstones since Kenya got independence; I wouldn't put past them to have requested the name change as I recall telling Ugaaska Barakaysan.

So the sandstones aren't one thing like Buur Hakaba.

Its a series from Garbahaarey to Wajiir. What we call "Buuraha" Garbahaarey are part of these sandstones. 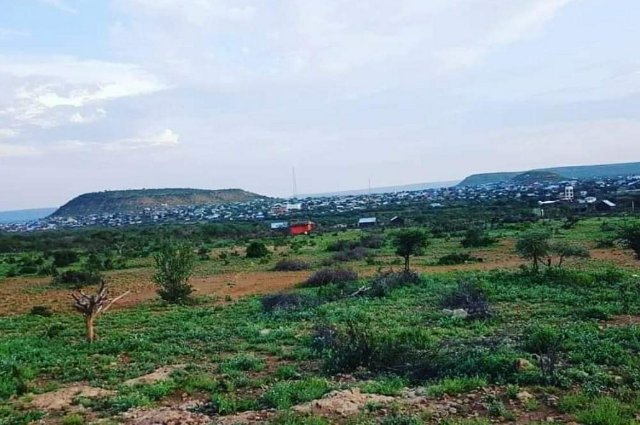 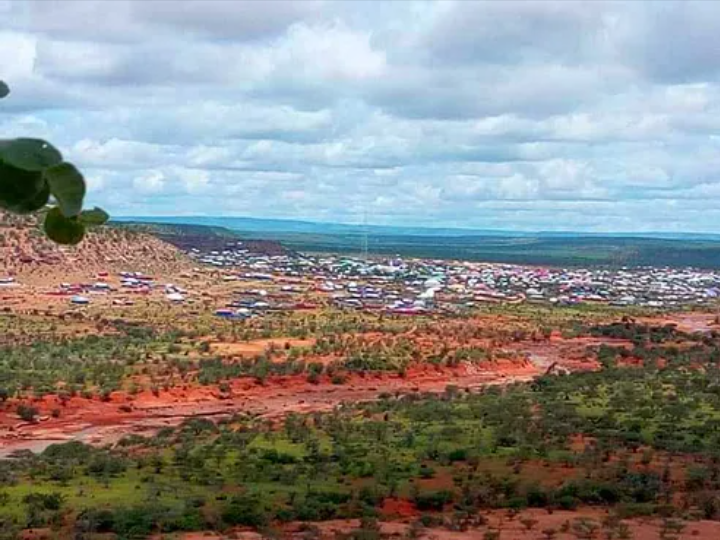 Since the series were first identified they were called the Marehan sandstones until the 60's.

After the 60's , all of a sudden the part of the sandstones in Gedo Region and Somalia started to be called "Garba Harre" Formation and the part of the series in Kenya were simply called "Danissa" formations unlike originally Danissa Hills OF THE Marehan Sandstones.

I have looked everywhere for SCIENTIFIC explanation of the change of nomenclature...for example were they no longer a single series...and I have yet to find a single scientific answer.

The few that remark on it just say the forner name is the name of a tribe....which is remarkable considering many scientific names are derived through geographical, cultural or orher associations at the place of the naming item. It is not routine that a scientific name is changed in hindsight for being named after a tribe associated with it. There is nothing offensive involved in this issue.

So my suspicion is there was an EXTRAORDINARY political intervention which may have to do with issues surrounding land claims between states that informed both the interference and the concurrence with British influence heavily affecting the outcome. 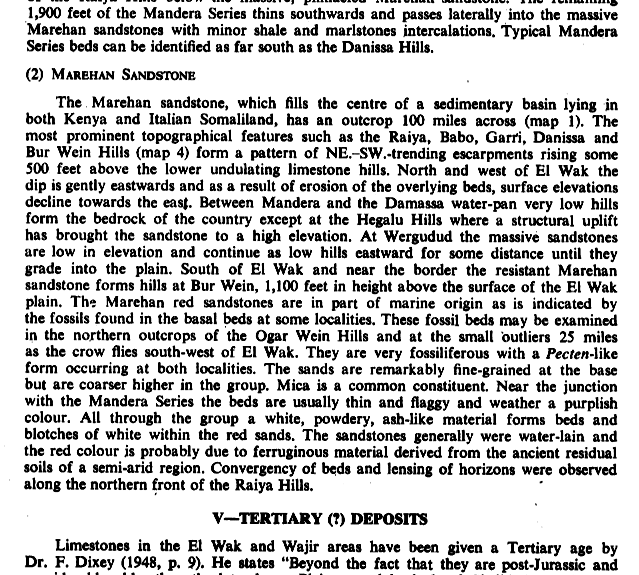 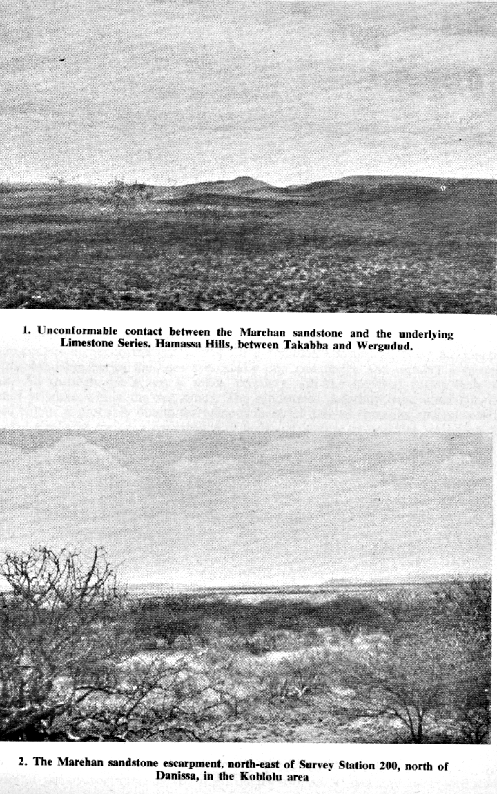 So it hasn't been called "Marehan Sandstone" in 60 years.
Top

Oh and the Marehan Sandstones were scientifically labelled the most advantageous features for identifying areas in Kenya with the greatest resource of groundwater aquifers.
Top

Murax, i told you have every bragging rights claiming everything on earth discovered by MX. Here you're like pack of wolves bragging and claiming about everything, and when called your bluff the emotional cry ensues. Keep up the bragging and the internet bravado.
Long live the kacaan2. I am out!

No, no-no-nop this is called "gaslighting."

You can gaslight yourself, but you aren't going to gaslight me.

1. You have called no bluff.
2. The topic is about "Deka Suftu" and there has been 0 change in the understanding of Deka Suftu since the first post.
3. The only thing you have done is display hostility, act childish, and insult clans and use imagery of displaced human beings.

Now that this particular issue is settled, shall we get on with the business of starting to make up since we have to find a way to live together in peace in Jubbaland and elsewhere?